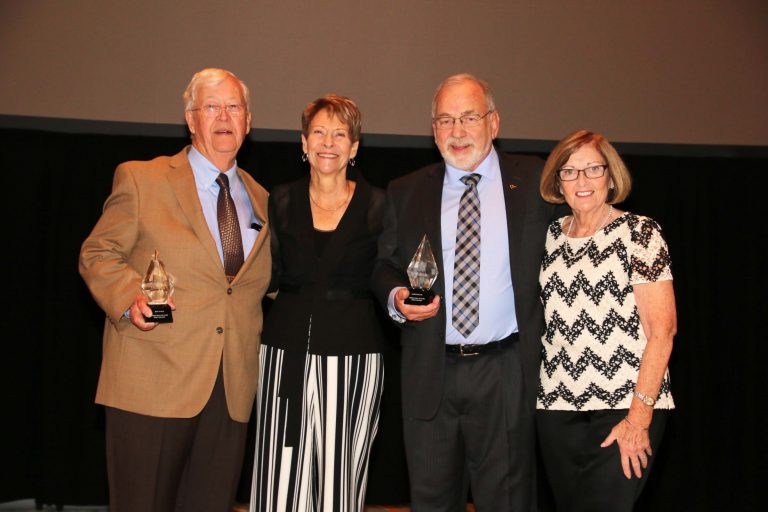 On March 7, 2019, our founder John Bussani was inducted into the NMEDA (National Mobility Equipment Dealers Association) Hall of Fame. He was honored as “one of the true pioneers and ground-floor innovators” of the mobility industry.

NMEDA told the story of how John fled Yugoslavia at the age of five with his mom, to join his father, who had defected to Italy to make a better life for his family. He remembered riding on a train in the dark, with the sounds of war raging all around him.

He had his first glimpse of the Statue of Liberty at 11 years old, from the ship that brought his family to America. They settled in Hoboken, New Jersey, and later moved to Freeport, New York. Later in life, John served in the U.S. Army, and experienced some of the physical challenges faced by veterans who were disabled in their service to our country. He started thinking about how he could help.

After the war, John worked as a draftsman and then started repairing automobile transmissions. While having dinner with friends one night, he was introduced to a polio survivor and the conversation touched on mobility. That night inspired him to start on a career that spanned over four decades and touched thousands of people’s lives. At first, he worked out of the trunk of his car, visiting people’s homes to put hand controls in their vehicles. John went on to become a charter member of NMEDA; was actively involved in developing the QAP program; and participated in the Adaptive Driving Alliance, as well as leading industry organizations.

Advancing People’s Lives
John retired in March 2017, and passed the torch to his son, Dan Bussani, who is a co-owner and CEO, and who has been involved in the business his entire life. Today, Bussani has two locations on Long Island (one in Nassau and one in Suffolk) and one location in Westchester, New York. Dan Bussani shares ownership of the company with co-owners and long-time employees, Dan Walsh and Stephen Wilmer.

At the time of John Bussani’s retirement, Nassau County District Judge Hon. Robert E. Pipia, who is also a customer and friend of Bussani Mobility, wrote this about him: “John’s development of his business and his hand in the nurturing of the vehicle modification industry, setting the standards to what it has become nationally, and has advanced the lives of individuals with disabilities throughout our country, making people mobile, and most importantly, independent. Where would we be without John’s vision and hard work? Enjoy all the fishing and libations you so richly deserve, John, because you ‘got us there.’”

When John Bussani received his award, to much applause, he talked about how it “was an incredible honor.” And, he went on to acknowledge some of the people he met early on that made a big impact as he was starting his business.

First, there was Alan Ruprecht, founder of Drive-Master in New Jersey. He would not allow his disability to stop him from driving. So, he fought back and used his ability to create universal hand controls to help him regain his mobility.

The second person who impressed John with his beliefs and business ability was Ralph Braun. He was told he probably would not survive past his early teens, let alone have a job or family. He proved them all wrong. Ralph’s abilities rose above his physical challenges to create products for his own use that, over time, became the world-class industry leader, BraunAbility.

And third, was Peter Zarba, who started as a customer and then worked for Bussani Mobility for 30 years. He inspired everyone who met him, and led the way by playing quad rugby, marathons, kayaking, fishing, and even skydiving ─ always putting abilities above disabilities. He said: “Pete was a daily reminder of what we (all of us in the mobility industry) work for, improving quality of life for people.”

Parting Words
John went on to say that these three unique people ─ Alan, Ralph and Peter ─ “were all told that their prospects were limited, but they saw beyond that. They saw the truth behind it, which was that they had abilities to live very useful and productive lives.

“In summary, we in this industry, are blessed on a daily basis to touch so many lives and help people achieve mobility freedom. We offer people products and services that are truly life-changing. So, keep it up, guys.”
John, everyone here at Bussani Mobility, is so grateful to you and proud of you!

5 Great Gadgets for People Who Use Wheelchairs »

No comments to show.